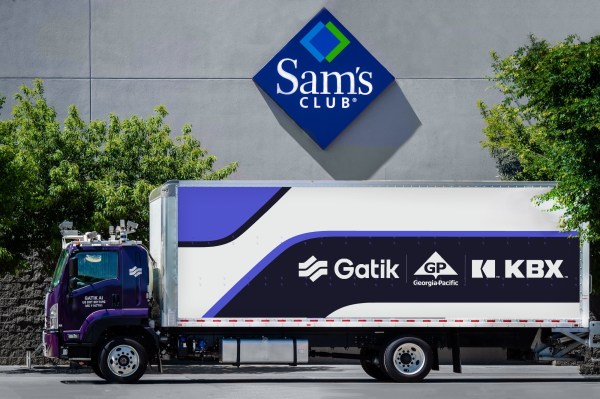 Gatik, the autonomous vehicle startup focused on the “middle mile,” will start using its self-driving trucks this summer to deliver Georgia-Pacific paper goods like Dixie cups and Northern Quilt toilet paper to several dozen Sam’s Club stores in the Dallas-Forth Worth area.

The deliveries, which are slated to begin in July, are part of a multi-year commercial partnership with Georgia Pacific and KBX, the transportation arm for Koch Industries. Under the partnership, Gatik will deliver goods 24 hours a day, seven days week across a network of 34 Sam’s Club locations. The autonomous box trucks will travel up to 300 miles a day.

But the aspiration is much larger, Gatik co-founder and CEO Gautam Narang told TechCrunch.

“The first phase is targeted towards making sure that the network is ready for AV adoption,” Narang said. “The aim is long term. We want to deploy our trucks and get the network ready for nationwide expansion.”

“It makes sense to use Class 6 because for each of our customers the emphasis and the focus is on just-in-time deliveries, high frequency deliveries and not having to wait for the truck to be fully loaded (before leaving),” he said, adding that this partnership will be the first time Gatik’s tech will disrupt a Class 8 short-haul regional network.

Before the COVID-19 pandemic exposed the challenges and opportunities around supply chain and logistics, Gatik was a bit of an outlier. The company built its business model around short haul logistics, not consumers like so many other AV startups working on sidewalk bots and robotaxis.

Gatik developed and is now applying its autonomous vehicle technology to the “middle mile” on the premise that using smaller self-driving box trucks are more efficient than Class 8 trucks at shuttling goods from distribution centers to retail locations.

Gatik came out of stealth in 2019 with a bang, landing Walmart as an investor and a customer. Gatik initially launched a pilot program in Bentonville, Arkansas delivering goods from mid-sized Walmart fulfillment centers to neighborhood markets.

Since then, Gatik started shuttling goods for Walmart in Louisiana, began fully driverless operations (meaning no safety driver behind the wheel) in Bentonville and launched a pilot with Loblaw Companies Limited in Ontario, Canada. The company has also expanded its operating network to include large-scale distribution centers.