When it comes to the development of a mobile app, one of the first questions to decide on is what to choose — native app or hybrid app. In this article, we will take a look at the difference between native and hybrid applications and try to figure out which one is better.

Pros and Cons of Native and Hybrid Apps

Just like everything else, native and hybrid applications have both: advantages and disadvantages. To make the right and most beneficial choice on the future app, you have to consider all the pros and cons of each application type.

The phrase ‘mobile app’ is more likely to be associated with native applications — the ones you download from app stores and allow to use your camera, microphone, GPS, and other requested features of your device. Let’s have a look at the native applications through the prism of software development.

The first thing to mention when speaking about native mobile apps is that they have different versions for each operating system (OS) like Android or iOS. It means the app requires several codebases and needs to be developed for each OS (for Android and iOS).

Since native app development requires the development for several OS, the need for different development teams arises increasing the overall cost and time. In case all of your developers are proficient at several technologies, expenses might be reduced (even though skilled software engineers cost more), but it will result in prolonging time-to-market.

Time of the development is the point, at which native apps are easily beaten by other types of applications. Using complex technologies and customizing features makes native apps quite a long distance.

The more sophisticated is the development, the harder is the maintenance. At the same time, the native app might be easier to test and debug, even though it still requires several development teams.

Native apps provide the best user experience and personalized product among all types of applications. This means high conversion rates and the increased loyalty of the end users.

The quality of user experience and of the application itself is also somehow regulated by the app stores. To be published in the app store and to receive the store’s support, your app has to meet high-quality standards.

Native app’s performance is far superior to hybrid or web mobile applications. It might be not so essential when talking about content-based apps with static data (like mobile banking or newsfeed), but when it comes to games and other animation, performance is crucial.

One more point, which pushes native apps far ahead of any other competitor is security. Native apps allow implementing two-factor authentication and access existing security features of a device (e.g. TouchID).

A hybrid application looks like a native app but runs in a webview. To some extent, it is a website wrapped in a native box. Let’s see which pros and cons it has.

Hybrid apps are built with HTML, CSS, and JavaScript, like websites. This allows writing only one single code to run the app at all devices regardless of OS.

Since there is only one codebase, it takes perceptible less time, money, and effort to create it.

At the same time, further customization is a weak point of any hybrid app. The more custom features you need, the harder and pricier the development becomes. Adding new features in the future may result in paying more than a native app would cost.

Just like native applications, hybrid apps can get access to the device’s built-in features (camera, GPS, contact list, etc.), but requires the deployment of special plugins. On one hand, your hybrid app can provide users with almost the same functionality as native apps do. On the other hand, it makes you dependent on the third-party code.

Comparing to robust native app’s performance, a hybrid application is slower and is hardly applicable for apps with a lot of graphics and animation.

Hybrid apps are generally simpler to maintain than native apps. But hybrid apps usually take more time to identify and fix the problem while for native apps there is a number of good tools for testing and debugging.

Before making a conclusion on which one is better: native or hybrid app, let’s summarize the main differences we mentioned above: 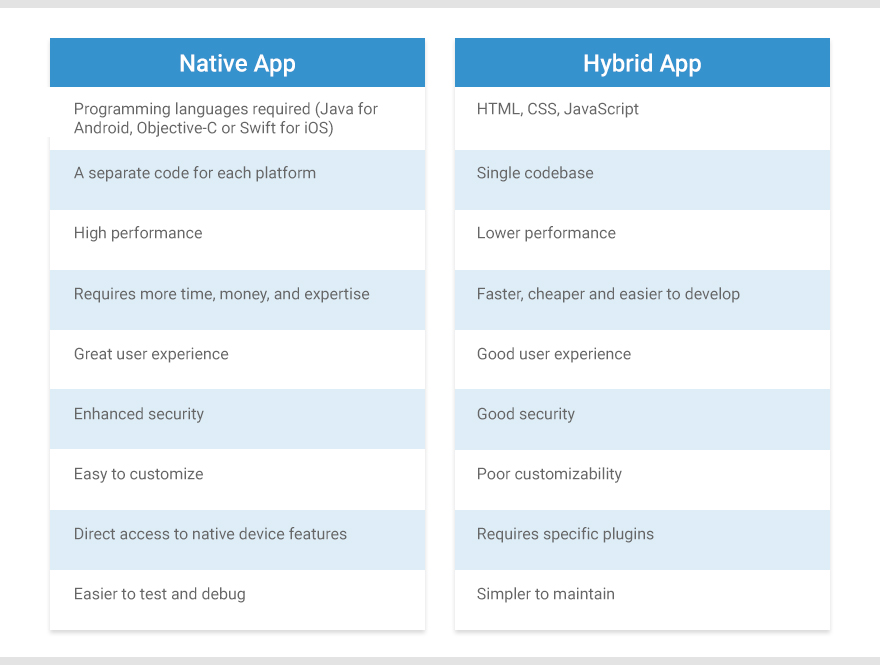 Native or Hybrid: Which One to Choose for Mobile App Development

A hybrid app is a perfect match in case you need a simple application and want to launch it as soon as possible. It is also a good choice for projects with limited budget and no need for serious customization.

In case you need a sophisticated app with a high level of performance and user experience, go with a native app. It is also preferable when an advanced level of security and a number of custom features is required.

There is also a strategy that combines both types and can be beneficial for your business. Start with a hybrid app, developing a minimum viable product (MVP) to test it on a small market. If it shows good results, create a native version with improved functionality and launch it for a wider audience. And if the first hybrid version fails the test period, just move forward to the next project, saving time and money you could waste on native app development.

SCAND’s mobile application development team has experience in creating any type of apps: web, native, and hybrid app development. We are always ready to advise you on the approach that suits best for your business goals and objectives.

If you still have questions about native and hybrid apps or want to develop your own application, feel free to contact us!