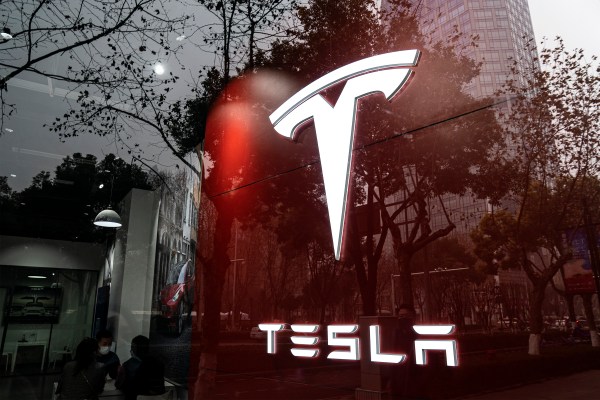 Tesla has accused the California Department of Fair Employment and Housing (DFEH) of failing to conduct proper investigations before it sued Tesla for racial bias at its assembly plant, according to a petition filed Wednesday with California’s Office of Administrative Law (OAL).

The DFEH filed a lawsuit in February against Tesla for alleged racial discrimination and harassment of employees at the company’s Fremont factory. Tesla had been attempting to pause the lawsuit in order to settle claims outside of court, which the automaker has argued should have been an option before the DFEH resorted to a lawsuit.

On Wednesday, a California Superior Court Judge Evelio Grillo said staying the lawsuit would be inappropriate, according to Reuters. (The news agency was also the first to report on Tesla’s petition with the OAL a day before it was officially filed.) However, according to court filings, Grillo did agree to set a hearing on August 23 for a demurrer motion, or a motion to dismiss, based on the questionable practices of the DFEH.

The automaker accuses DFEH — in its reply to Grillo’s decision not to grant the motion to stay the case and in the petition filed with OAL — of adopting “underground regulations” that disregard requirements it needs to make before filing lawsuits against employers, such as giving the employer fair notice of an investigation and helping mediate disputes before going to court.

Tesla might have better luck in August, since the California’s Fair Employment and Housing Act backs some, if not all, of the automaker’s claims about how DFEH should have conducted itself. However, sources familiar with the law told TechCrunch the OAL petition likely won’t have an effect on Tesla’s case, largely because it would have needed to be submitted before the case began.

The OAL petition, therefore, appears to be a move by Tesla to temper the agency’s authority by insisting it follow additional steps before suing employers like Tesla. 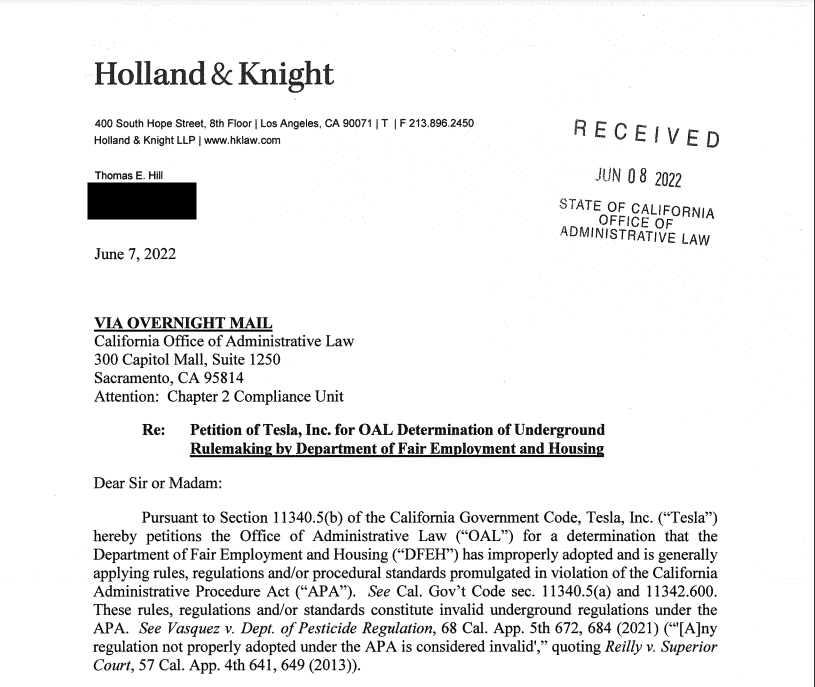 Specifically, Tesla says the DFEH failed to provide the automaker with notice of the “particulars” of its investigations before initiating those investigations, and didn’t provide information to support its findings against Tesla. The automaker also appears to take issue with the fact that the lawsuit was filed without first engaging in “good faith conciliation and mediation,” and that the suit was filed on claims “not previously investigated and/or concerning which the employers were not provided pre-suit notice.”

The law appears to state that the DFEH is required to make a prompt investigation into claims of bias, but not that they necessarily need to let the employer know of an investigation. However, the language of the law does say the DFEH should “immediately endeavor to eliminate the unlawful employment practice complained of by conference, conciliation, and persuasion,” and that before filing a civil action, “the department shall require all parties to participate in mandatory dispute resolution in the department’s internal dispute resolution division free of charge to the parties in an effort to resolve the dispute without litigation.”

The DFEH could not be reached in time for comment.

The OAL has 60 days to accept or reject a petition based on certain criteria. But again, it’s unclear whether accepting this petition will aid Tesla’s cause with this particular case as it is already underway. The OAL did not respond in time for comment.

The DFEH’s lawsuit against Tesla is one of several pending in California courts that accuse the automaker of tolerating discrimination and sexual harassment at its factories.

A California judge this week moved closer to settling a case with former Tesla elevator operator Owen Diaz, who alleged rampant racist treatment and harassment in the nine months he worked at the Fremont factory. On Tuesday, U.S. district judge William Orrick in San Francisco told Diaz he had two weeks to accept the $15 million payout from Tesla, which is a far cry from the $137 million a jury had previously awarded Diaz.